What is the carbon dioxide emission amount for every kilogram of product produced? In China, the authoritative "Product Carbon Footprint Certificate" is issued by China Quality Certification Center. Jiangsu Zhongneng Silicon Technology Development Co., Ltd. received the very first carbon footprint certificate for granular silicon in China, right before the World Environment Day on June 5th. The subject certificate shows that the carbon footprint value of Zhongneng’s granular silicon per kilogram is of 20.74 kilograms of carbon dioxide equivalent.

This is known to be the first "carbon footprint ID card" and the first authoritative appraisal certificate obtained by domestic granular silicon. This carbon footprint value is worldwide a new low, breaking the previous record held by the German company Wacker, of 57.559 kilograms of carbon dioxide equivalent per functional unit. It certainly illustrates the absolute advantage of China’s granular silicon in terms of carbon emission in the big data environment, despite the fact that Wacker’s certificate is issued by a foreign institution.

According to Guo Xiaohui, Director of Technology R&D and Quality Department of Zhongneng Silicon Technology Development Co., Ltd., the company has been engaged in granular silicon production for 10 years, with an annual output of about 10,000 tons currently. They have been saving energy and reducing emissions by lowering energy consumption and material consumption. Granular silicon is mainly used in the components of downstream photovoltaic cells. Its diameter is only about 2 mm. In comparison, rod-shaped silicon produced by traditional process usually has a diameter of 3 meters, and a carbon footprint value of 70 to 90 kilograms of carbon dioxide equivalent. Granular silicon has brought down carbon emission by 65% to 70%, completely consistent with its advantages regarding comprehensive power consumption. The comprehensive power consumption for the production of per kilogram of granular silicon is 18 degrees, soon to be reduced to 15 degrees. All indicators meet or exceeds the process requirements of "carbon neutrality". 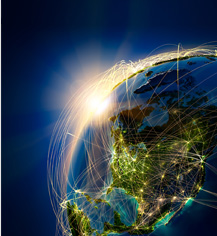