GCL Group adheres to the new energy security strategy proposed by General Secretary Xi Jinping, focusing on promoting high-quality development, accelerating the energy production and consumption revolution, helping to build a clean, low-carbon, safe and efficient energy system, and striving to be a positive practitioner of the new energy security strategy revolving around “Four Revolution and One Collaboration”.

Dating from 1990, GCL has been following the leadership of CPC and leading green growth with the red genes. In guide of Xi Jinping Thought on Socialism with Chinese Characteristics for a New Era, GCL acts out the new development philosophies in practice. In the organization, there are 12 CPC committees, 5 CPC branch committees, 120 CPC divisions and 3,000 CPC members. GCL has attached great importance to the pioneer role of Party members and stronghold function of Party organizations. Progress has been continuously made on the Party’s ideas, organizations, principles, regimens and anti-corruption initiative. It is highly motivated in applying the Party’s roadmaps, directions and policies. Education programs around “Two Studies, One Action” run through all Party activities. With the new development philosophies guiding production and operation, GCL’s growth has been infused with strong fresh impetus.

As the pioneer of Chinese power enterprise of diversified ownership, GCL entered the electric power industry with diversified sources of investment, and created numbers of industrial precedents regarding project construction intensity, technological innovation and operational efficiency. Following the trend of global energy revolution, GCL continues to promote the transition of electric power business from traditional to distributed and mobile energy, and transform from a generator to an integrated clean energy service provider. As the industry leader of clean energy capacity, GCL clean energy businesses have been growing continuously, with power generation installations of various types, such as green thermoelectric, natural gas, PV, wind, biomass and garbage power generations.

In the field of intelligent energy, through the smart integration of Energy Internet and power digitalization that connect power network, heat network, natural gas pipe network and information network, GCL has delivered quick response and interconnected deployment of energy micro-grid and regional energy network, with the support of big data and cloud platform. By leveraging its advantages in distributed energy, “Six-in-One” micro-grid and integrated control platform of power demand side, GCL has built an energy management platform that manages “supply-network-sale-use-cloud” and a digitalized power factory, and taken the lead in expanding incremental network distribution and power sales. Many projects are recognized as showcases in new energy micro-grid, incremental power distribution network, multi-energy integrated optimization, and “Internet +” intelligent energy.

By following closely to the reform of the national power system, actively participating in the ownership diversification of state-owned and central enterprises, and leveraging the trend of Energy Internet, GCL has been extending its power business into the service front, transforming itself from a generator into green energy service provider, and becoming a value co-creator in the connected power network. In the mobile energy and electric service market, GCL sets its footprints in new energy materials and electrochemistry with high-end lithium-ion materials as the source, and aims to build an international high-end lithium battery industry cluster. It integrates electricity and green travel services and uses smart cloud technology to carry out integrated operation of charging port, vehicles and electricity, for establishing a new green electric ecosystem.

GCL owns a completely integrated PV industrial chain that covers silicon material, silicon wafer, cell, module, system integration and PV power station development and operation. It serves as the chairman of the Global Solar Energy Council and the Asian Photovoltaic Industry Association. Relying on GCL’s polysilicon production methods and other proprietary & controllable core technologies, it further lessened the power consumption by 64%, and lowered the cost of polysilicon by 90% in 10 years. The production volume and market share of silicon material and wafer maintain industrial leading position for consecutive years. In the field of battery and module manufacturing, since the acquisition of Chaori Solar in 2014, it took GCL three years to rank top ten in the world. GCL actively implements the parallel path of mono and polycrystalline, and leads the PV industry's technological progress and cost reduction through technological research and innovation, cooperation with domestic and overseas facilities and acquisitions, to promote the PV’s grid parity.

Echoing the “Belt and Road Initiative” and “Go Global Strategy”, internationalization of GCL has taken initial shape. It has set up branches in over 10 countries in Asia, Europe, Africa and North America with more than 10 power and manufacturing projects deployed, and developed natural gas industrial chain covering natural gas prospect, extraction, storage, transport, all the way to the terminal use and service. The Ethiopia-Djibouti Oil & Gas Project, jointly developed by GCL and large central enterprises and national financial institutions, is the largest energy projects in Belt and Road footprints in Africa, and a priority project of capacity cooperation between China & Ethiopia. The project covers an area of 117,000 km2 with natural gas resources amounted to 5 trillion m3. The annual LNG output of 10 million tons is planned to be developed in three phases. In June 2018, Ethiopia has produced the first barrel of high-quality crude oil. This project has been enlisted as a key project in the Belt and Road Projects Pool by National Development and Reform Commission, and the No. 1 national construction project by Ethiopia and Djibouti, making it the long-term supply base for high-quality clean energy, to bring new impetus to the economic and social prosperity of East African countries and the construction of “Beautiful China”.

Innovation is the all-time primary driver for GCL. Innovation in management, model, culture and other aspects are driven by its technological innovation. With the GCL Central Research Institute and General Design Institute as coordinating bodies, 8 domestic R&D branches as supporting organs, R&D centers in the U.S. and Japan as the assembling points of international research resources, a GCL innovation and research system is now in place. The GCL think-tank consists of 8 academicians from the Chinese Academy of Sciences. Led by experts from the national Thousand Talents Program and Chinese Academy of Engineering, the research team is made of over 2,500 researchers from home and abroad working in over 70 R&D facilities, including academician workstations, post-doctoral workstations, internationally certified labs and engineering centers. Possessing over 3,000 patents and copyrights, leading or participating in the formulation of over 60 sets of international, national and industrial standards, GCL has filled technological gaps and hit international frontier in various areas.

Sticking to corporate social responsibility and persisting in green development, GCL commits itself to the philanthropic course and engages in disaster and poverty alleviation actions. Up to now, GCL’s donations had amounted to 280 million. Responding to the national call for precise poverty alleviation, GCL takes an active part in PV poverty alleviation projects by investing in PV power station, from which 42,000 poverty-ridden families have benefited. In addition, GCL has built over 200 libraries in the rural area, covering 14 cities and provinces, 200 schools and 20,000 students, donated 150,000 books and travelled more than 20,000 km. GCL annually releases Corporate Social Responsibility Report that discloses its economic, environmental and public responsibilities in a spontaneous, timely and complete manner. In 2017, its annual corporate responsibility report has received five stars, the highest accreditation by Chinese Academy of Social Sciences. The clean energy directly or indirectly produced by GCL greatly reduces raw coal consumption and emission of carbon dioxide and sulfur dioxide. GCL propels to build a beautiful China by living the green, low-carbon, cyclical development vision. With these efforts, it received the “Philanthropy of Jiangsu” award twice from the Jiangsu Provincial Government.

He who remembers how he started gets to the end. Adhering to the idea that Bringing Green Power to Life and Focusing on green growth for a sustainable improvement of living environments, abiding by the Corporate Spirit of Entrepreneurship, Innovation, Competition, Transcendence, and Core Values of Value-oriented, innovation-driven, striving-based, collaboration-grounded, with the Fundamental Law as management charter, GCL deepens its corporate reform and accelerates strategic transformation, to ride the trends characterized by global clean energy development, commercialization of power systems, integration between energy and digitalization and electric transportation. GCL enhances its responses to the demand side of energy to echo with the supply side reform. GCL pushes its comprehensive transformation forward from "clean energy producers" to "clean energy integrated service providers" with a market and customer-oriented, technology and capital-driven, talent and industry-based strategy. GCL strives to be a respectable leading global new and clean energy enterprise, and to realize the GCL Dream - Powerful GCL, Prosperous Staff and Complimented by Society.

Boasts with over 60 bases globally
Top  11 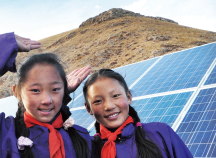 Since its establishment, GCL Group....

Since its establishment, GCL Group has never stopped in its philanthropy efforts. Despite in one of the most difficult periods of the global economy, we did not lower our budget for corporate social responsibility because we believe that GCL is crucial to the sustainability development of humanity. GCL will continue to grow with our society.